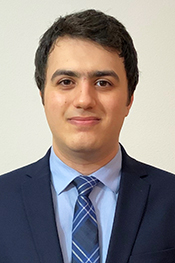 Davood B. Pourkargar joined the Tim Taylor Department of Chemical Engineering as an assistant professor in 2020. Prior to coming to K-State, he had been a senior engineer for ExxonMobil Research and Engineering, 2019-2020; a postdoctoral associate in the department of chemical engineering and materials science at the University of Minnesota, 2016-2019; and a postdoctoral researcher in the Catalysis Center for Energy Innovation and the department of chemical and biomolecular engineering at the University of Delaware, 2015-2016. He earned a doctoral degree from Pennsylvania State University in 2015, and M.S. and B.S. degrees from Sharif University of Technology in 2010 and 2008, respectively.

His research interests include optimization-based control of complex process networks, computational multiscale modeling of process systems in sustainable and smart manufacturing, cyber-physical systems and network communication analysis in large-scale processes, and system identification using process data analytics and machine learning with application to chemical and energy systems. In particular he is interested in the control and automation of sustainable production of chemicals and energy in combined cycles, and secure estimation and control of complex networks in modern cyber-physical systems and smart process manufacturing. At K-State, his goal is to lead a research group in development of enabling technologies designed to enhance control and real-time decision making for large-scale process networks. These proposed research topics are significant in solving major scientific and industrial challenges in the areas of sustainable and secure operation of modern chemical process manufacturing and energy systems.

Pourkargar has authored or co-authored more than 30 refereed papers in journals and conference proceedings, and has presented his research more than 50 times at international conferences, research institutes and universities. His contributions have received several major recognitions including the Robert F. Smith School Distinguished Junior Researcher Award from Cornell University in 2017, the O. Hugo Schuck Best Paper Award from the American Automatic Control Council in 2014, the Walter R. and Aura Lee Supina Graduate Fellowship in Chemical Engineering from Pennsylvania State University in 2011, and Best Presentation awards at the American Control Conferences in 2013 and 2015, as well as at AIChE annual meetings in 2015 and 2017. He is a senior member of the American Institute of Chemical Engineers (AIChE) and a member of Institute of Electrical and Electronic Engineers (IEEE), and Society for Industrial and Applied Mathematics (SIAM).