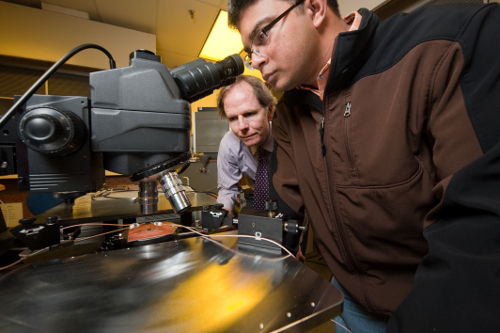 Three boron compound semiconductors, boron nitride (BN), boron phosphide (BP), and icosahedral boron arsenide (B12As2) are being studied at K-State for their potential applications in radiation detection and radioisotope batteries. These semiconductors have properties that are distinctively different than the most commonly used semiconductors, such as silicon and gallium arsenide. For example, one isotope of boron (B-10) reacts strongly with neutrons - much more strongly than most elements. This reaction produces charged particles that are relatively easy to detect, making a solid state neutron detector possible. Such neutron detectors would find applications in homeland security, medical diagnostics, petroleum exploration, and fundamental science. These could provide a low-cost alternative to the most common neutron detectors which rely on helium-3, a particular scarce and expensive isotope of helium.

Some boron compound semiconductors are extraordinary resistant to radiation damage. Under intense radiation, the electrical properties of most semiconductors quickly degrade, leading to device failure. In contrast, such failure could be avoided in devices based on icosahedral boron arsenide. An intriguing application of this property is the betacell, a device that directly converts nuclear energy to electrical energy. These devices could take advantage of the enormous energy densities of nuclear energy sources, that can be ten thousand times higher than gasoline. Nuclear sources can also provide energy for decades, much longer than chemical batteries.

At K-State, we are focusing on developing synthesis techniques that produce boron compound semiconductors of high crystal perfection with low residual impurity concentrations. Bulk crystals are produced by precipitation from molten metal solutions, and thin films are prepared by chemical vapor deposition. The former produces relatively thick crystals with low defect densities, while the latter produces thin films either with low residual impurity concentrations or with intentionally added impurities to achieve certain electrical properties. The structural, optical, chemical, and electrical properties of these materials are characterized to provide feedback for optimizing the synthesis process. Through further process optimization, the goals are to produce these materials that are suitable for the novel electronic devices envisioned.