The Role of Ionic Liquids in the Synthesis of Nanoporous Materials 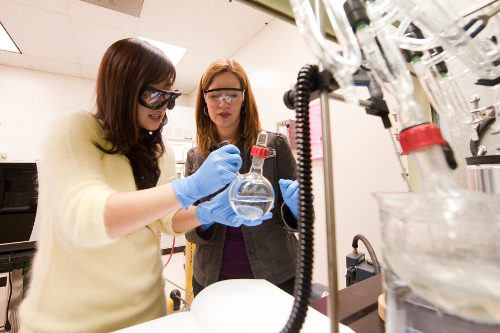 Ionic liquids are organic compounds that are composed of ions and are liquids near room temperature. They are a good alternative to water as a solvent, in part because of their extremely low vapor pressures. Their specific properties can be tailored by changing their molecular structure, specifically the ligands composing the molecules. Research is focusing on using a combination of solubility and spectroscopy measurements, thermodynamic theory, and molecular modeling to study nanoporous materials made via ionothermal synthesis, where the solvent is an ionic liquid. The effect of systematic changes to the ionic liquid structure on the interactions with the nanomaterial precursors and how that in turn affects the formation of the final material are under investigation. This work is developing (1) the first solubility measurements of nanomaterial precursors in ionic liquids, (2) thermodynamic models to describe the phase behavior of the precursors and ionic liquids, (3) the crucial validation of molecular dynamics simulations for ionic liquid / precursor systems, (4) the quantification of the chemical complexes formed between the solute and solvent in the initial stages of zeolite synthesis, and (5) the elucidation of trends between the solute/solvent phase behavior and material formation that will be used to rationally select ionic liquids solvents for synthesis of novel nanoporous materials.