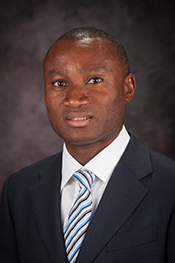 Professional Experience
Placidus Amama received a bachelor’s degree in chemistry from the University of Calabar, Nigeria, in 1992. He received the Japanese government scholarship for graduate students in 1996 and pursued an integrated program completing his master’s and doctorate in environmental engineering at Yokohama National University, Japan, in 1997 and 2002, respectively. After completion of his doctorate, he conducted two postdoctoral fellowships at the department of chemical engineering at Yale University (2002 – 2004) and Birck Nanotechnology Center, Purdue University (2004 – 2007) as a NASA-INaC fellow. He then worked as a research engineer at the Materials and Manufacturing Directorate, Air Force Research Laboratory from 2007 until he joined the faculty at K-State in August 2013. Amama spent the summer of 2016 working for Nanoconduction, a startup company in Silicon Valley.

Research
Amama’s research program focuses broadly on the rational design of catalysts for controlled and scalable growth of carbon nanomaterials, to exploit their unparalleled material properties in heterogeneous catalysis, electrochemical energy storage, and environmental remediation. Many important applications of carbon nanotubes (CNTs) require precise control of their structural properties. We are developing an in-depth fundamental understanding of the nanoscale phenomena occurring during the growth process that will guide the fabrication of efficient catalysts. Given the unique properties of CNTs and graphene, the use of tunable 3D nanocarbon hybrid structures as catalyst supports in the synthesis of clean fuels via Fischer-Tropsch synthesis is being explored. These new supports will improve mass transport of reactants and products, heat dissipation during the exothermic reaction, and the stability of the catalyst. We are also interested in understanding the CNT enhancement mechanisms in TiO2 photocatalysis and developing a pathway for scalable synthesis of efficient visible-light-active CNT-based/TiO2 coatings for air purification.

Academic Highlights
Amama has co-authored one book chapter, more than 40 journal papers, and more than 50 conference papers, which, as of 2016, have resulted in over 1450 citations and an H-index of 21 according to Google Scholar. Amama's work has been recognized by several awards including JSPS Fellowship Award in 2012, KSU Presidential Mentoring Fellowship in 2013, Air Force SFFP Award in 2014 and 2016, “The Most Approachable Professor” Award from ChE undergraduate students in 2014, and the 2016 Outstanding Assistant Professor Award in the College of Engineering.