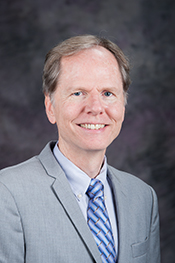 Professional Experience
Professor J.H. Edgar received a bachelor's degree in chemical engineering from the University of Kansas in 1981. He next attended the University of Florida, where he earned master's and doctoral degrees in chemical engineering in 1982 and 1987, respectively. He joined the chemical engineering department at K-State in January of 1988 as an assistant professor, and received promotions to associate and full professor in 1993 and 1997, respectively. Edgar was a research fellow at the NASA Lewis Research Center in the summers of 1990 and 1991, a sabbatical fellow at the Naval Research Laboratory (1994-1995) and a guest lecturer at Radbound University in Nijmegen, the Netherlands (2006-2007). In 2013, he was named a Kansas State University Distinguished Professor. He is currently on temporary assignment as a manager of the Electronic and Photonic Materials program of the National Science Foundation (2019-2021).

Academic Highlights
Edgar entered the research field of wide band gap semiconductors in its infancy. Since then, the field has grown from a topic of interest to a handful of researchers into several multi-billion-dollar businesses, including high energy efficiency light emitting diodes for general illumination and energy-saving power electronics. This technological revolution has been made possible through advancements in material quality.

Edgar has authored and/or co-authored more than 170 refereed journal articles, 50 conference proceedings, and is the editor of two books. According to Google Scholar, the total number of citations to his work exceeds 64,000, and he has an h-index of 35. His research has been funded by the National Science Foundation, the Department of Energy, the Office of Naval Research, the American Chemical Society, and the II-VI Foundation. The total funding for his research exceeds $9 M. He has overseen the successful completion of 22 Ph.D. and 17 M.S. degrees in chemical engineering.