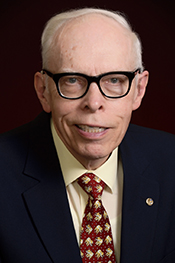 Professional Experience
Larry E. Erickson received a bachelor's degree in 1960 and doctorate in 1964 in chemical engineering from Kansas State University. He has been a member of the chemical engineering faculty at K-State since 1964. In 1967-68 he conducted research in biochemical engineering at the University of Pennsylvania, and introduced courses in biochemical engineering and bioseparations at K-State. From 1985-2018, he has provided leadership for hazardous substance research at K-State. From 1989-2003, he was director of the Great Plains/Rocky Mountain Hazardous Substance Research Center, a consortium of universities with headquarters at K-State. In order to advance pollution prevention and improve environmental management, he introduced seminars in hazardous waste engineering, air quality, and sustainability. He has worked with more than 70 graduate students, coauthored more than 450 papers, traveled professionally to more than 25 countries, and participated in more than $50 million of funded research projects. He helps to provide leadership for the Consortium for Environmental Stewardship and Sustainability, and the annual Dialog on Sustainability. In January 2015, he transitioned to emeritus professor of chemical engineering.  He has been employed by Mobil Oil Company, ESSO Research and Engineering Co., Humble Oil and Refining Company. He has been a visiting faculty member at MIT, University of California, Berkeley, Institute of Biochemistry and Physiology of Microorganisms, Pushchino, Russia, and Institute of Microbiology, Prague, Czech Republic.

Research
Erickson's research has involved the applications of chemical engineering to chemical, environmental, biochemical and food engineering problems. Transport phenomena, reaction engineering, process analysis and optimization, and systems design have been applied to a number of applications, including desalination, biological waste treatment, stream water quality, feedlot runoff, single cell protein production, yoghurt fermentations, frozen soy yoghurt, and nanoscale catalysts.  Research with a Russian team on the applications of mass and energy balance regularities in the analysis of fermentation processes has been recognized for its historical importance. Research on the fate and transport of contaminants in plants and the beneficial effects of vegetation in contaminated soil was significant in the development of the field of phytotechnology and the organization of the International Phytotechnology Society and founding of the International Journal of Phytoremediation.

Academic Highlights
Erickson was awarded the first doctorate degree in chemical engineering at Kansas State University. His Ph.D. research with Professor L.T. Fan was on boundary layer behavior on moving continuous surfaces. While more than 50 years have passed since completion of the dissertation in 1964, the publications of the research have been cited often and recently. Erickson directed the Great Plains/Rocky Mountain Hazardous Substance Research Center which received more than $25 million in funding, saved more than $10 in environmental remediation costs for every $1 spent on research, and helped two participating faculty be inducted into the National Academy of Engineering. Erickson has provided leadership for three edited books: Handbook on Anaerobic Fermentations (1988), Nanoscale Materials in Chemistry: Environmental Applications (2010) and Solar Powered Charging Infrastructure for Electric Vehicles: A Sustainable Development (2017). He has been awarded the K-State Commerce Bank Distinguished Graduate Faculty Award, the Irvin E. Youngberg Award by the University of Kansas, the AIChE Environmental Division Lawrence K. Cecil Award, and the International Phytotechnology Society Milton Gordon Award. Erickson is a Fellow of AIChE and the Industrial and Engineering Chemistry Division of the American Chemical Society. He received the Distinguished Service Award of the International Phytotechnology Society for providing leadership for the 12th International Phytotechnology Conference in 2015.